According to Vladimir Galabov, principal analyst, IHS Markit, strong demand from cloud service providers (CSPs) is boosting Mellanox’s profile in the Ethernet adapter business, with the company’s market share rising to within 5 percentage points of industry-leader Intel in the first quarter of 2019.

Mellanox’s share of the Ethernet adapter market revenue climbed 3 percentage points in the first quarter to reach a total of 20 percent, according to the latest Data Center Ethernet Adapter Equipment report from IHS Markit. This compares to a 25 percent market share for Intel.

CSPs have been the key driver behind Mellanox’s winning streak. These companies are transitioning to higher networking speeds, i.e., 25GE, 50GE and 100GE. They also are adopting adapters with CPU offload capabilities, such as processing of networking and storage protocols.

“Growth in artificial intelligence (AI) and other data-intensive workloads was a definitive trend in the first quarter of 2019, and this was reflected in strong demand for offload Ethernet adapters,” said Vladimir Galabov, principal analyst at IHS Markit. “As a result, revenue for offload adapters accounted for more than 50 percent of the total Ethernet adapter market revenue for the first time. Another significant trend continued to be the transition to 25GE and 100GE adapter speeds, which recorded 16 percent and 298 percent year-over-year revenue growth in the first quarter, respectively. Hyperscale CSPs are leading this transition, although the first signs of larger enterprise deployments were evident in the first quarter.”

Intel in the first quarter garnered a 25 percent share of the Ethernet adapter market, representing a 6-percentage point decline compared to the first quarter of 2018. The company’s portfolio, which is made up of 1GE and 10GE adapters, continues to lose its market appeal, impacting revenue growth. Intel is updating its portfolio in the second half of this year, which could help strengthen its competitive position.

Mellanox recorded a rise in enterprise adoption of 25GE adapters. As a result, revenue from enterprise customers made up 35 percent of Mellanox’s quarter, a 12-percentage-point increase from the first quarter of 2018. For the first time, sales of programmable adapters totaled more than $1 million in revenue for Mellanox, with a deployment of 40GE adapters driving the growth.

Broadcom won share from Intel in the established market for 1GE and 10GE basic network interface controllers (NICs). It also recorded a $2 million revenue upside from a 50GE offload adapter deal with a hyperscale CSP.

Marvell narrowly clung to its number-four position in revenue market share after reporting a fifth quarter of sequential revenue decline. At Marvell’s latest earnings call, chief executive officer Matt Murphy indicated that the Ethernet adapter business it gained through the acquisition of Cavium was not a focus for the organization and was not expected to become a significant growth engine. 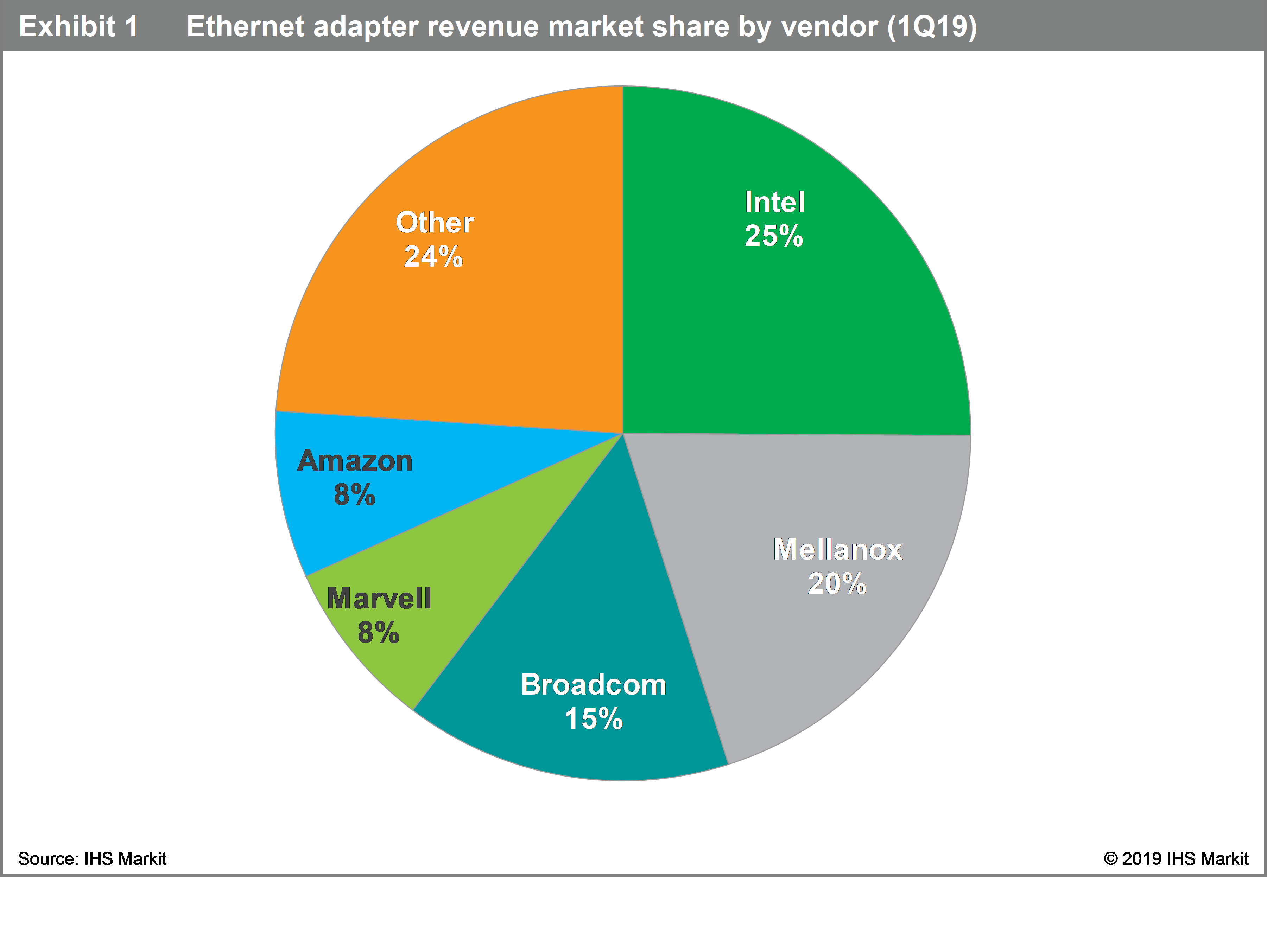 “A review of the initial shipment reports for the second quarter of 2019 revealed that Mellanox attained 20 percent quarter-over-quarter growth, driven by adoption of its 25GE and 100GE programmable adapters and its 25GE and 40GE offload adapters,” Galabov said. “Within the next month we will know if Intel managed to keep its leadership position in the Ethernet adapter market.”

Video of the Week